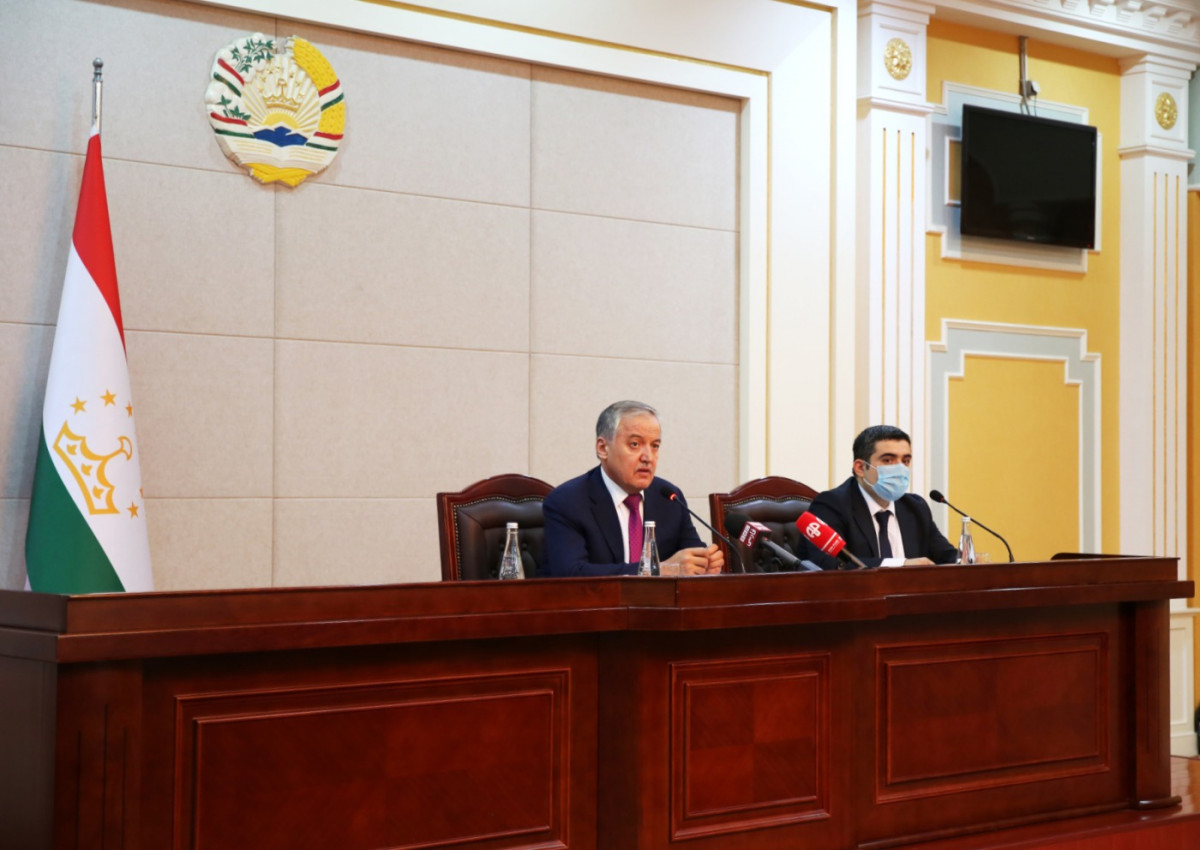 STATEMENT
by Sirojiddin Muhriddin,
Minister of Foreign Affairs of the Republic of Tajikistan

Press Conference on performance of the
Ministry of Foreign Affairs in the first six months of 2020
(27 July 2020, Dushanbe)

Regretfully, the global outbreak of the novel coronavirus (Covid-19) and the World Health Organization’s announcement of the pandemic has had a severe impact on the Ministry of Foreign Affairs’ agenda in the international arena during the reporting period. In accordance with the instructions and orders of the Head of State and the Government of the country, the Ministry mainly focused on prevention of the spread of Covid-19 and reduction of the socio-economic consequences of the pandemic in this period. To this end, the Ministry established a permanent Task Force operating 24/7 to monitor the situation with the Covid-19 pandemic conforming to the order of the Minister of Foreign Affairs.

The Ministry has significantly contributed to attracting international humanitarian aid and repatriating our nationals stranded abroad, including Russia, China, Ukraine, Kazakhstan, Uzbekistan, USA, Germany, India, Turkey, Kuwait, United Arab Emirates, Iran, Pakistan and other countries due to the suspension of international flights. We continuously pursue our activities in this area.

The situation that has arisen as a result of the spread of the novel coronavirus around the world, has had a serious impact on bilateral and multilateral cooperation between our country and its foreign partners. Nevertheless, the Ministry has sought to sustain and expand Tajikistan’s relations with partner countries and international organizations at a decent level. In this period, communications with our foreign partners have mainly proceeded through virtual or video conferencing, telephone conversations and exchange of messages.

During the first half of the year, the expansion of bilateral and multilateral relations between the Republic of Tajikistan and the Commonwealth of Independent States member states has traditionally been a priority of our foreign policy.

During this period, we further continued and developed our political, economic, cultural and humanitarian relations with the countries in Asia, Europe, America, the Pacific Ocean and Africa.

The visit of the President of the Republic of Tajikistan His Excellency Emomali Rahmon to Moscow to attend the celebrations dedicated to the 75th anniversary of the Victory in the World War II and the meeting of the Leader of the Nation with the President Vladimir Putin of Russia was one of the most important events in this period.

In January and February 2020, the Minister of Foreign Affairs of Tajikistan paid official and working visits to Germany, Serbia, Malaysia, Brunei Darussalam, Russia, Uzbekistan and Qatar. The meetings with the leadership and other officials of the partner countries discussed priorities of bilateral economic, trade, investment and infrastructure cooperation.

During the reporting period, the Ministry of Foreign Affairs of Tajikistan convened political consultations with foreign ministries of other countries, including Ukraine, Qatar and Italy, and Dushanbe appointed new ambassadors to Kyrgyzstan, Palestine, Israel and Indonesia.

Over the past six months, I took part in international fora and events held via video conferences. I would like to emphasize about my statement on the position of our country on topical issues of the international agenda and priority areas of our country’s participation in the CIS at the meeting of the Council of Foreign Ministers of the Commonwealth of Independent States.

I attended the extraordinary consultation of the Ministers of Foreign Affairs of the Shanghai Cooperation Organization member states, which for the first time took place in a video conference mode. In the course of online meeting, I had a thorough exchange of views on the priority tasks of the SCO to counter the novel coronavirus pandemic and conferred possible mechanisms of interaction to mitigate its negative consequences on the socio-economic development of the SCO member countries. In my speech, I stressed the need to ensure transit transportation of goods, food security, as well as the supply of medical equipment and medicines in the current pandemic condition. The consultation resulted in adopting a Statement of the SCO Foreign Ministers on the spread of coronavirus disease.

On May 26, a regular meeting of the Council of Foreign Ministers of the Collective Security Treaty Organization (CSTO) was held via video conference. At the outcome of this meeting, the Foreign Ministers endorsed a Joint Statement on solidarity and interaction in the fight against coronavirus outbreak, embrace of the UN Secretary General’s call for a global ceasefire due to the Covid-19 pandemic, celebration of the 75th anniversary of Victory in the World War II, and reaffirmation of adherence to the purposes and principles of the UN Charter.

On May 29, I participated and delivered a speech at a high-level joint forum entitled “Accelerating implementation of the 2030 Agenda through water, sanitation and climate action” co-organized via video conference by the Permanent Missions of Tajikistan, Canada, Finland, Hungary, Japan, Kenya, the Netherlands, Portugal, and Singapore in the UN, and the Department of Economic and Social Affairs with the support of UN-Water.

On June 12, a video conference of the Foreign Ministers of Central Asian and the European Union countries took place. The e-meeting participants discussed the issues of multifaceted cooperation between the countries of Central Asia and the European Union on the mitigation of the Covid-19 pandemic impact, the status quo in the world, as well as the joint efforts to tackle emerging challenges.

On June 18, an international video conference of Foreign Ministers was held as a part of the “Belt and Road” initiative with the participation of leaders from the UN, the United Nations Development Programme and the World Health Organization. In my speech, I stressed the importance of joint actions to prevent the escalation of the coronavirus and to restore sustainable socioeconomic development of countries.

On June 30, a high-level video conference of C5 + 1 format with the participation of Central Asian Foreign Ministers and the US Secretary of State took place. The parties discussed issues related to the fight against Covid-19, its repercussions for the healthcare and economy areas, the efforts of countries regarding its elimination, the economic stability, the expansion of regional cooperation and security. I highlighted the importance of the steps taken by the Tajik Government to reduce the spread of Covid-19, the role of regional cooperation, the assistance rendered by our partners in this process, and proposed to undertake actions to prevent the potential second wave while gradually easing the quarantine system.

Given the spread of the novel coronavirus and the introduction of restrictions in countries around the world, we decided to postpone the Second International High-Level Conference on the International Decade for Action “Water for Sustainable Development, 2018-2028” to the next year.

During the reporting period, we strengthened the legal framework of Tajikistan’s relations with its international partners by signing five bilateral documents, and making eight international legal acts effective.

The Ministry’s cooperation with foreign media continued as for registration and creation of favourable environment for their activities in the country. In accordance with the Regulation on the Accreditation of Foreign Journalists, the Ministry’s Section of International Information and Accreditation accredited more than 30 foreign journalists who applied for a temporary and permanent operation in Tajikistan.

During this period, we established the Centre for Professional Development and Retraining of Diplomatic Service Staff of the Ministry on March 5 based on the decision of the Government of Tajikistan and the executive order of the Minister of Foreign Affairs.

This year, Tajikistan, along with Afghanistan, is co-chairing the Heart of Asia – Istanbul Process. There are plans to host the next conference of Foreign Ministers within the framework of this process in Dushanbe.

Today the world is facing a great crisis that could be a turning point in the modern history. During several months since the emergence of Covid-19 – the disease caused by a novel coronavirus, analysts have expressed different views on the world the disease would leave behind. However, many people acknowledge that the world we are entering into will be fundamentally different from the world that existed prior to this disease. Tajikistan should be prepared for the new scenario.

Tajikistan will hold presidential election in the second half of the year, which is of a great importance for the future of our country, ensuring peace and greater economic and social progress. This year, Tajikistan will hold its yearly presidency in the Shanghai Cooperation Organization and the Collective Security Treaty Organization. Next year, the capital of our country will host a meeting of the Collective Security Treaty Organization and a jubilee meeting of the Council of Heads of State of the Shanghai Cooperation Organization on the occasion of its 20th anniversary. Importantly, Dushanbe was proclaimed as the Cultural Capital of the Commonwealth of Independent States in 2021. Moreover, Tajikistan will celebrate the 30th anniversary of its Independence on September 9 next year.

These important events expect the Ministry of Foreign Affairs to make serious preparations to ensure proper presidential election abroad, presidency of the Shanghai Cooperation Organization, the Collective Security Treaty Organization and decent celebration of the 30th anniversary of our beloved country’s Independence.

The Leader of the Nation, President of the Republic of Tajikistan, H.E. Emomali Rahmon in his recent Address to the Majlisi Oli (Parliament) of the Republic of Tajikistan defined the main directions of domestic and foreign policy for the coming period and set specific tasks for effective implementation of foreign policy and ensuring progress in various sectors. In this regard, the Ministry of Foreign Affairs is ready to make its valuable input to the remarkable fulfillment of the tasks set forth by Mr President in his Address.

Thank you for your attention.